Zooplankton sampling and analysis - then and now 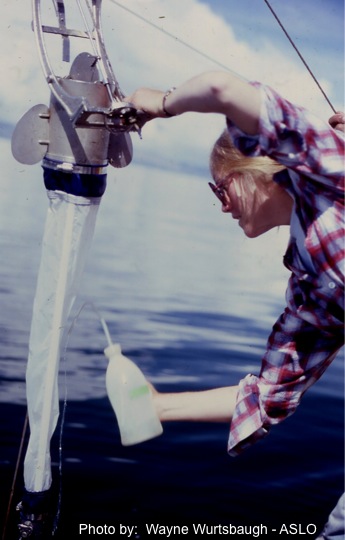 They towed three nets horizontally at three different depths in the water column for about an hour so that each one strained 35-40 cubic meters of water.  When the nets were back aboard the ship, researchers preserved their specimins in formaldehyde for examination in the lab under microscope.  Zooplankton collections usually include thousands of animals, which makes counting every single one extremely difficult, so most researchers will evenly split or subsample to get a representative portion of the total that can be completely enumerated.  The DelZoop I crew stirred their collections to evenly distribute all the animals and drew a known quantity from this homogenous mixture to identify completely.

Even with subsampling, identifying zooplankton by microscope is a time-consuming process.  Though this method is still widely used today, interest in more zooplankton data on a faster time scale has given rise to new optical techniques that rapidly process samples.

The DelZoop II cruises in the Delaware Bay employed a few different techniques for collecting and analyzing zooplankton compared to DelZoop I.  We used much larger nets compared to Clarke-Bumpus samplers.  Shown is the 'bongo' frame with two 0.5 m diameter nets, which allowed us to sample 35-40 cubic meters of water in about 5 minutes (12 times faster than the DelZoop I cruises).  To sample the whole water column, we used double-oblique tows, meaning we towed the net diagonally from the surface down to the bottom and back to the surface again.  Similar to DelZoop I, we also preserved their samples in formaldehyde for analysis back in the lab.

To enumerate and identify samples much faster than microscopy, DelZoop II used a new optical scanner called ZooScan.  It can take high-resolution images of a sample that are then analyzed with associated software to isolate individual organisms, measure them, and semi-automatically identify.  With ZooScan, DelZoop II was able to rapidly quantify samples for further analysis. 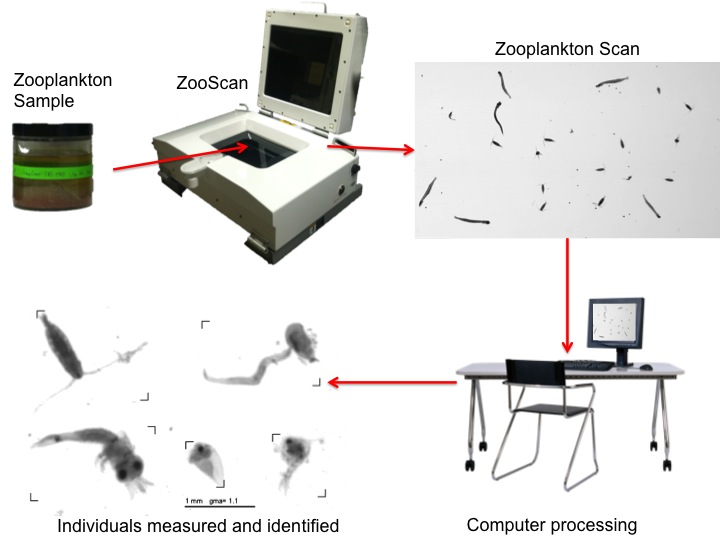 ZooScan is just one kind of new optical tool researchers now have to study zooplankton.  Others use optical tools that take images right from the water.  Not only does this eliminate the need for nets, preservation, and lengthy laboratory work, but these in situ tools also provide researchers with images of zooplankton in their natural state.  This is especially important for fragile, gelatenous organisms, such as jellyfish, that are usually damaged when they are collected in a net.  Here are a few examples of these tools: